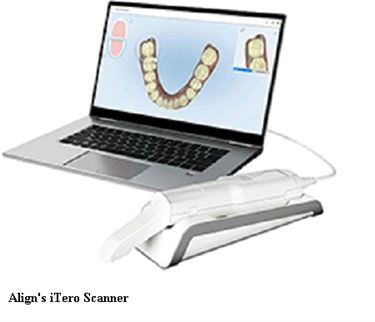 If you needed a crown or root canal lately, your dentist may have used a fancy wand to scan and send a picture of your mouth to the dental lab. Chances are that the scanner was the Itero Element scanner, a computer scanning system that is manufactured by Align Technologies. The Itero scanner requires a disposable sleeve for the wand. One of Align’s competitors, Strauss Diamond Technologies, began selling a competing sleeve, called “MagicSleeve”. In its advertisements, Strauss used Align’s trademarks in hashtags, product descriptions and product images.

Align brought suit against Strauss and sought a preliminary injunction to stop Strauss from using its trademarks. Strauss argued that its use of the Align trademarks was “nominative fair use”. The nominative fair use defense has 3 parts: (1) the trademark is the only word available to accurately describe the product; (2) the mark is used only as is “reasonably necessary” to identify the product; and (3) the user does nothing that would suggest endorsement by the trademark owner. Putting aside the fact that the first and second elements are contradictory, the court determined that Strauss’ defense was full of cavities. Strauss’ various uses of Align’s trademarks failed at least two out of three of the nominative fair use test. Align’s motion for preliminary injunction was granted.

WHY YOU SHOULD KNOW THIS. Nominative fair use can be a useful tool in a competitive industry. Sometimes you have to refer to your competitor’s products in order to differentiate yourself in the market. Deciding what crosses the line can be tricky. One thing we know is that Strauss crossed that line.