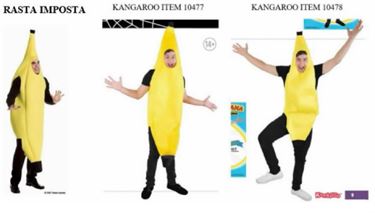 Kangaroo argued that Rasta Imposta’s copyright was invalid because the costume was a useful article and not eligible for copyright protection. But a useful article can have design features that are eligible for copyright. The design element has to be identified and imagined apart from the useful article so it would qualify as a pictorial, graphic, or sculptural work either on its own or when fixed in some other tangible medium. This is called the separatability analysis. So the court asked two questions: (1) Can the artistic feature of the useful article’s design be perceived as a two- or three-dimensional work of art separate from the useful article? and (2) Would the feature qualify as a protectable pictorial, graphic, or sculptural work either on its own or in some other medium if imagined separately from the useful article? For the first question, the court rejected Kangaroo’s argument that the banana costume is just a depiction of a banana and there’s nothing creative about a banana. The court held that a depiction of fruit can be creative. And there are elements of the costume that can be separated from a banana. So the answer to the first question was “yes”. For the second question, the court rejected Kangaroo’s argument that everyone would need to use those non-utilitarian elements of a banana in a banana costume or as copyright lawyers call it, scenes a faire. In other words, there’s only one way to create a banana costume that looks like a banana. The court held there are different ways to fashion a banana costume and elements stand on their own and apart from the banana itself. In conclusion, the court held: “Because Rasta established a reasonable likelihood that it could prove entitlement to protection for the veritable fruits of its intellectual labor, we will affirm.”

WHY YOU SHOULD KNOW THIS. The Rasta Imposta decision gives us an in depth analysis of what it takes to create protectable elements in a Halloween costume; or any useful article for that matter. If you decide to dress up as a banana this Halloween, Rasta Imposta is ready to fulfill your desire. But, without disparaging the creative efforts of Rasta Imposta, the most popular adult costume this Halloween is Hot Mr. Rogers.