Your Joint or Mine? 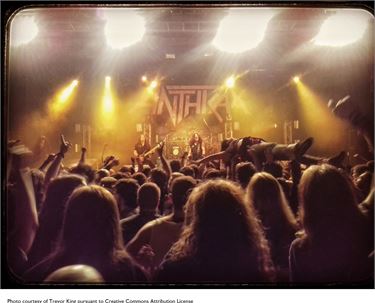 The Hard Rock Café’s operating company, JC Hospitality LLC, tried to register the trademark “The Joint” for its casino based music venues. The USPTO refused registration. On appeal, the TTAB affirmed. Hard Rock then appealed to the Federal Circuit Court of Appeals who also affirmed the refusal.

The Examining Attorney who reviewed the application thought the words “The Joint” were either merely descriptive or even possibly generic for a restaurant or entertainment space. So the Hard Rock Café argued that The Joint had acquired distinctiveness.

To determine whether a mark has acquired distinctiveness, the USPTO or a court may consider: (1) purchasers’ association of a mark with its owner (typically by means of consumer surveys); (2) the length, degree, and exclusivity of use; (3) the amount and manner of advertising; (4) sales and number of customers; (5) intentional copying; (6) unsolicited media coverage of the product or service bearing the mark.

In this case, the Examining Attorney had pointed to the fact that the dictionary defines the word exactly the way that Hard Rock used it. And there were a lot of third parties who used the same words in connection with other restaurants and entertainment venues. Hard Rock tried to argue that adding the word “the” to the word “joint”, distinguished it from other uses. Hard Rock pointed out that there are non-restaurant and entertainment uses for the word, such as another word for prison. So that made Hard Rock’s use more like a trademark. The Examining Attorney, the TABB and the Federal Circuit all rejected these arguments. The Federal Circuit’s opinion pointed out that although Hard Rock has spent millions for over 20 years promoting The Joint, there was no evidence of how much similar restaurant and entertainment venues spend on their promotion. Also, Hard Rock didn’t provide any evidence of unsolicited third party mentions.

So Hard Rock can’t register “The Joint” as a trademark.

WHY YOU SHOULD KNOW THIS. This opinion was rather harsh. In some ways, it set an impossible standard of proof for Hard Rock; and maybe others who try to prove acquired distinctiveness. Certainly, Hard Rock had longevity of use, a lot of advertising and a lot of money invested in advertising. But demanding proof of expenditures by other restaurant and entertainment venues? That kind of information isn’t public information. Imagine asking a competitor for that information. It would be unusual to even get a response. Unfortunately, this outcome may make it harder to prove a descriptive trademark acquired distinctiveness.