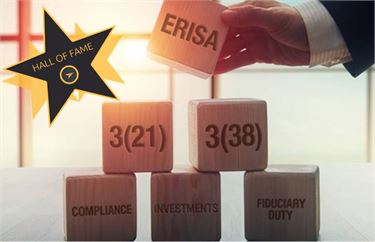 We have an award winner for 2018: Florida eye doctor Samuel Poppell.

In McLain v. Poppell, it was alleged that Dr. Poppell, owner of the Emerald Coast Eye Clinic and trustee of its 401(k) plan with total investment discretion, invested plan assets primarily in VirnetX, a publicly traded company whose principal business was acting as a “patent troll” (a company that acquires patents and uses them primarily to sue other businesses for alleged patent infringement).

Dr. Poppell’s investment decisions were based on his personal review of internet message boards. His investment acumen resulted in a loss of more than one-half of the plan’s asset value in a single year as the VirnetX stock cratered.

Dr. Poppell was able to settle the suit filed by participants against him for about 25 percent of the plan’s total investment losses. However, the Department of Labor subsequently intervened and required Dr. Poppell to compensate participants for the balance of their aggregate losses.

So, for his complete disregard for his fiduciary duties to his employees and his related retaliation against participants who had the temerity to complain, Dr. Poppell is our 2018 ERISA Hall of Shame “honoree.”

Fiduciaries of 401(k) plans need to engage and rely on their professional advisors – you can’t just wing it when it comes to plan investment decisions.