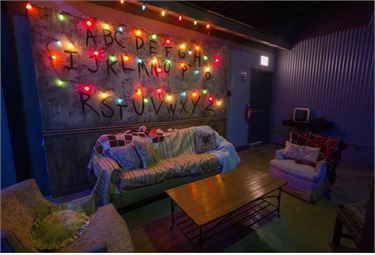 We celebrate the premier of Season 2 of Netflix’s hit horror series, Stranger Things, with a not-so-spooky cease and desist letter. The popularity of Stranger Things seeped into the culture. So much so, that in August 2017, Chicago-based Emporium Arcade Bar opened a pop-up location called “The Upside Down” which was designed to look like the sets from the series. The only problem was that they didn’t get permission from Netflix. Netflix’s in-house lawyers sent a cease and desist letter. Netflix took an even-tempered, but effective, approach. The letter could be summarized but it’s much better to see it in its entirety:

My walkie talkie is busted so I had to write this note instead. I heard you launched a Stranger Things pop-up bar at your Logan Square location. Look, I don’t want you to think I’m a total wastoid, and I love how much you guys love the show. (Just wait until you see Season 2!) But unless I’m living in the Upside Down, I don’t think we did a deal with you for this pop-up. You’re obviously creative types, so I’m sure you can appreciate that it’s important to us to have a say in how our fans encounter the worlds we build.

We’re not going to go full Dr. Brenner on you, but we ask that you please (1) not extend the pop-up beyond its 6 week run ending in September, and (2) reach out to us for permission if you plan to do something like this again. Let me know as soon as possible that you agree to these requests.

We love our fans more than anything, but you should know the Demogorgon is not always as forgiving. So please don’t make us call your mom."

The bar owners cooperated and closed down as planned.

WHY YOU SHOULD KNOW THIS. Owners have a right to shut down infringement of their Intellectual Property. Sending a cease and desist letter to the infringer is a first step. But cease and desist letters come in all shapes and sizes. An aggressive letter may be appropriate for stopping an infringing competitor. But not so much when dealing with a small company who might have infringed unintentionally. Netflix received a lot of good press for its handling of the Stranger Things pop-up bar. It got the point across without hurting the bar’s owners and alienating the fan base.