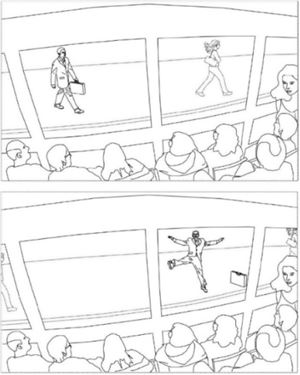 A motion trademark is generally considered a type of trademark called “trade dress”. Trade dress protects the visual appearance of a product. Some examples are: (1) the zoom-in view of a female statue at the beginning of every Columbia Pictures' movie (Reg. No. 1,975,999), (2) the "duck march" associated with PEABODY hotels (Reg. No. 2,710,415), and (3) the lighting effects that rotate around the microphone of Apple's SIRI personal assistant and knowledge navigator (Reg. No. 4,471,608).

But, trying to protect a motion as a trademark isn’t easy.

Take, for example, a tour bus operator in New York City, The Ride LLC. The Ride offers a twist on the usual sightseeing tour around Manhattan (when such things were done and will be again). At various times, when the bus stops, street performers break out into song and dance. The Ride has gotten a lot of good feedback on this fun sightseeing twist. So it tried to register the sightseeing twist as its trade dress.

The Ride submitted a drawing (see the picture) and described the mark as follows:

The mark consists of the live visual and motion elements of the trade dress of a guided bus tour in which as the bus approaches at least one predetermined location on the tour an entertainer who is dressed as a banker walks normally along the street and then performs a tap dance routine dancing act when the bus stops at the predetermined location as viewed from inside of the bus. The drawing shows two sequential freeze-frames of the mark, in which the top frame shows an entertainer dressed as a banker walking along the street on the side of the bus and in which the bottom frame shows the entertainer performing a tap dance routine at the predetermined location. Dotted lines in the drawing show placement of the mark and are not part of the mark.

The examining attorney refused registration and on appeal, the Trademark Trial and Appeal Board (TTAB) affirmed. There were basically 3 problems with the application.

Second, the specimens of use didn’t match the drawing. The specimens consisted of photographs of various performances inside and outside the bus. But none of them matched the drawing.

Third, the mark didn’t function as a trademark. The Ride submitted survey evidence from its former riders to show that consumers connect the street performances with The Ride’s services. The TTAB discounted the survey as self-serving. The Ride didn’t provide any evidence that the public at large saw the motion of the street performances as a source or product identifier for The Ride.

WHY YOU SHOULD KNOW THIS.  This case shows the importance of the connection with the drawing of a trademark and the specimen of use. All 3 issues demonstrate the need to be careful as a trademark is being developed. Let’s focus on the second problem. The failure to match a drawing and a specimen of use happens more than you might think. To avoid this problem, owners should consider developing the specimen of use with an eye towards how the trademark will be featured on it. And, owners always consult with their trademark attorneys to help make the appropriate connection.