Everybody Does It Fails as a Defense 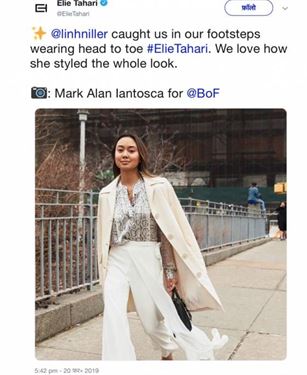 Some of you may recall the argument you used with your parents that went something like “Everyone else gets to go” or “Everyone else’s parents let them [fill in the blank]”. Chances are that these arguments were unsuccessful.

Elie Tahari Ltd. learned that “Everybody does it” doesn’t work in a copyright infringement case either.

The Tahari fashion brand is famous for high end sleek and trendy clothes.

Mark Iantosca, a Brooklyn-based photographer, snapped a picture of the digital content creator and stylist, Lin Niller Huynh, wearing a Tahari outfit. Tahari posted the photo on its social media, complementing Lin’s style and crediting Mark as the photographer.

The problem is that Mark didn’t grant Tahari a license to post the photo. So he sued Tahari for copyright infringement.

In granting Mark’s motion for partial summary judgment on the issue of liability, the district court rejected each of Tahari’s defenses. And there were quite a few. The most unusual one was the “Everybody does it defense”. Tahari argued that its use of the photo was “di minimus” and simply reposting a picture in social media is commonplace and trivial. The court held that there’s “nothing ‘trivial’ about a business utilizing a professional photographer’s work to promote its products”.

There were other unsuccessful defenses too. Tahari challenged whether Mark had registered the copyright before filing suit. The court held that Mark held a valid copyright since he identified the registration number in the complaint. Tahari argued that the infringed photo may not be the one deposited with the Copyright Office in connection with the registration. The court, sua sponte, ordered up a copy of the deposit from the Copyright Office and verified that the photo and the registration matched. Tahari argued that the posts were “fair use”. This one was a hard sell because there was nothing transformative about reposting a photo for commercial purposes. So, the court held that each fair use factor weighed in Mark’s favor and against Tahari. Finally, Tahari argued that it gave Mark credit for the photo. The court held that attribution is not a defenses to copyright infringement.

The parties were ordered to appear at a conference to discuss damages.

WHY YOU SHOULD KNOW THIS. The free exchange of content over social media platforms creates all too many opportunities to post someone else’s works without permission. When the sharing of content is used to promote products or services without permission, infringement can become a costly proposition. Note also that that giving attribution is not a defense to copyright infringement.