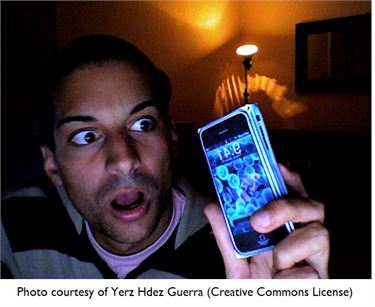 Alex Cruz was on his way to visit his girlfriend in the Tribeca neighborhood of New York City. He heard a commotion, took out his iPhone and took a snap shot. He thought he was just taking a photo of the police subduing a crazy person. What he really caught was a picture of law enforcement taking down a suspected terrorist. Alex shared the photo with a friend who then posted the photo on Instagram.

Cox Media came up with some defenses.

The first defense was that the photo wasn’t creative enough to be protected by copyright. Cox Media argued that Alex didn’t make any creative choices when he took the photo. The court rejected this argument. Copyright law has long recognized rights based on a bare minimum of creativity. A photograph may be original in three respects: rendition, timing, and creation of the subject. This means that almost any photograph may claim the necessary originality to support a copyright. Alex’s photo met these criteria.

Cox Media next claimed that its publication of the photo was fair use. The court rejected the argument using four-factor test in the Copyright Act which are: (1) the purpose and character of the use; (2) the nature of the copyrighted work; (3) the amount and substantiality of the portion used in relation to the copyrighted work as a whole; and (4) the effect of the use upon the potential market or value of the copyrighted work. The court didn’t have to go further than the first factor. The heart of the first factor is whether the use is “transformative”. Transformative use alters the meaning or message of the first work. In other words, does the potential infringer’s use add something new with a different purpose or nature of the work? Cox Media didn’t do anything to transform Alex’s photo. It just republished it without commentary. So the court held that Cox’s use was not transformative. The court felt that buying Cox Media’s fair use defense is “antithetical to the purposes of copyright protection to allow media companies to steal personal images and benefit from the fair use defense by simply inserting the photo in an article which only recites factual information—much of which can be gleaned from the photograph itself.”

Cox Media’s last defense was the First Amendment. The court rejected this too holding if fair use exists then First Amendment rights are protected too.

WHY YOU SHOULD KNOW THIS. This case has two takeaways. First, the amount of creativity needed for copyright protection is often misunderstood. All that is needed is a bare minimum of creativity. It doesn’t have to be novel. It doesn’t have to be on the Annie Leibowitz level of artistry. And it isn’t measured by “sweat of the brow”. Alex didn’t have to work hard to take his photo. But he got copyright protection anyway. Second, fair use is not a catch all even for media companies. Reporting on an incident in the news isn’t a blank check to use some else’s protectable content.