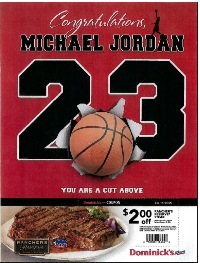 The great Michael Jordan can teach us all some things about how to exploit our Intellectual Property. Most recently to the tune of $8.9 million. MJ obtained a jury verdict against the now defunct Dominicks food stores for violating his Right to Publicity which is the right to protect one's persona from unauthorized commercial use. Dominicks had placed an ad in a Sports Illustrated magazine that commemorated MJ's career. The ad used MJ's name and image and included a coupon. The court held that the ad went too far into commercial use without MJ's permission. Then the issue of damages was decided by a jury. They didn't give MJ all he asked for. But it's still a lot of money. MJ says he's going to donate any recovery he gets. MJ also has a suit pending against Jewel Food Stores for an ad it placed in the same magazine. We'll see how that goes.

TAKE AWAY: So how does MJ's protection of his persona help owners of other types of Intellectual Property? The answer lies in MJ's licensing strategy. MJ testified that he is very careful about endorsement deals. He doesn't accept every single one he's offered. That drives up the value of the deals he does take. MJ's obvious lesson is that licensing deals, whether for trademarks, copyrights or patents, should be carefully reviewed for how they fit into an overall strategy. If you license your Intellectual Property to too many licensees, you effectively drive your own price down.