No Accounting for Mouthwash Taste 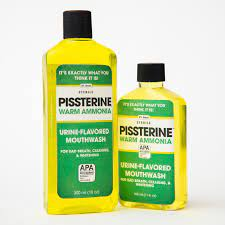 In Brief:   Parody is permitted but not always available for registration as a trademark.

Johnson & Johnson manufactures and sells LISTERINE, a mouthwash that has long adorned the bathroom sinks of the consuming public. Johnson & Johnson opposed Pissterine’s attempt to register its trademark.

Pissterine defended the mark as being a parody of a well-known brand. And, as parody, there is little likelihood of confusion.

Despite the obvious parody, the Trademark Trial and Appeal Board analyzed the factors of likelihood of confusion.

First, the Board considered the strength of LISTERINE as a trademark. The mark is strong both conceptually as an arbitrary mark and commercially due to extensive public recognition and renown.

Second, the Board found that the marks were similar because they both ended in the letter string “ERINE” and they almost sounded alike.

Third, the Board found that the goods were sufficiently related that a consumer would be confused as to the source or origin of the goods.

Fourth, the Board found that because the goods were relatively lower priced goods, consumers wouldn’t take great care in making a purchasing decision.

The Board did not find that the PISSTERINE mark was filed in bad faith. Pissterine’s intent to create a parody was obvious.

The Board sustained Johnson & Johnson’s opposition to registration of “PISSTERINE”.

Why You Should Know This:  What, if anything, could Pissterine have done to change the outcome? There’s no easy answer. But perhaps Pissterine could have presented evidence that the consumer would have no trouble seeking the difference between a mouthwash and a parody of a mouthwash.

Note that parody can be an affirmative defense to trademark infringement.