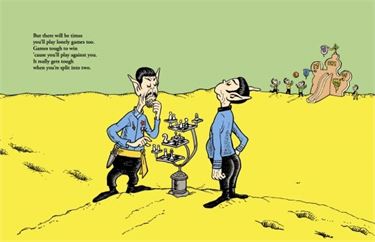 In Brief:   A mash up of Dr. Seuss and Star Trek is not fair use.

For almost four years, comics’ legend, Ty Templeton, and Star Trek’s “Trouble with Tribbles Episode” writer, David Gerrold and their company, ComicMix, have been in litigation with the Dr. Seuss Estate. ComicMix is trying to publish a graphic comic called “Oh, The Places You'll Boldly Go.” The comic mashed Dr. Seuss’ “Oh The Places You’ll Go” with Star Trek characters. ComicMix said it was fair use. The Dr. Seuss Estate said no.

The procedural history is basically sometimes the courts said it was fair use and sometimes they said it wasn’t. The Ninth Circuit Court of Appeals may have ended ComicMix’s foray into the final frontier.

The case is now going back to the trial court where it will be very hard for ComicMix to continue asserting fair use.

WHY YOU SHOULD KNOW THIS.  Even the courts don’t see eye to eye when it comes to fair use. In this case, the courts at different levels volleyed back and forth with whether Boldly was fair use. Critics of the decision have some valid tribbles, I mean, quibbles. The analysis of the first factor seems to use a narrow definition of parody. The foundation of parody has to call back to the original so the reader or viewer can connect the two. And the definition of parody can be fluid. The analysis of the final factor could have been viewed another way. Simply ask the question: Would I buy Boldly instead of the original?  If the answer is “no”, then this factor should weigh in favor of fair use.