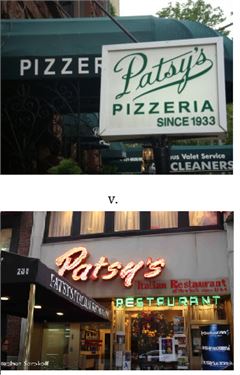 In Brief: Trademarks that co-exist for a long time don’t always create a likelihood of confusion.

The two restaurants co-existed peacefully for about 50 years. Then the two brands started selling sauce in the early 1990s. That’s when the legal epic began.

It started with a case that ended in 2003 with a decision upholding an award of attorneys’ fees against IOB for misconduct in presenting fraudulent documents during litigation.

In 2008, the Second Circuit Court of Appeals issued a lengthy opinion admonishing the parties for creating a “labyrinthine course of litigation” that was a “procedural morass”, “tortured” and “resulting in confusion and mistake.”

In the midst of this, Patsy’s Brand obtained a trademark registration for “Patsy’s of New York” in 2006.

In 2016, IOB filed suit because the Patsy’s of New York registration was blocking IOB’s attempts to register “Patsy’s Pizzeria”. Following cross-motions for summary judgment, the District Court issued an order finding no likelihood of confusion between the marks. But the District Court didn’t actually grant or deny either motion. Even though neither party specifically requested relief before the USPTO, the court ordered the USPTO to grant the IOB’s pending Patsy’s Pizzeria trademark.

The Patsy’s Pizzeria trademark application has been expressly abandoned. The litigation between the parties ended. At least for now.

WHY YOU SHOULD KNOW THIS:  This is a good example of two important things. First, litigation can be a quagmire and not necessarily an effective tool for both sides of the controversy. Especially when the trial court and the appellate court spar with each other about what an order actually means. Second, this case shows the longer two similar trademarks peacefully co-exist, the less likely either party can claim a likelihood of confusion. So trademark infringement should be addressed as soon as it’s discovered.