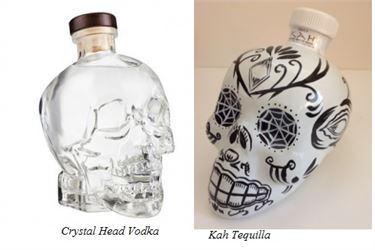 Dan Aykroyd’s Crystal Head Vodka gets to keep its dress. Crystal Head Vodka’s maker, Globefull, Inc. brought a trade dress suit against Elements Spirits Inc. for copying its distinctive Day of the Dead inspired packaging on Element’s Kah Tequila. And then the 7 year odyssey began. Globefull lost the first jury trial. It appealed the denial of its motion for a new trial. The Ninth Circuit agreed that the trial was unfair because defense counsel had referenced similar litigation in Mexico in closing argument. Back in district court, Globefull lost its motion for preliminary injunction. But Globefull persevered. During the second trial, the owner of the elements was caught in a lie. At the previous trial, she testified she never heard of Crystal Head Vodka when she was developing Kah Tequila. In the second trial, the testimony of other witnesses contradicted that statement. The jury found in favor of Globefull on liability. The amount of damages will be set at a later date.

WHY YOU SHOULD KNOW THIS. Sometimes, litigation can feel like a never ending spiral of defeat. But, a party who is secure in its position and is willing to fight for it can win the day. Position security arises from preparation and follow through. For the preparation side, due diligence is a must so you don’t encounter unexpected surprises. On the follow through side, perseverance can win the day.