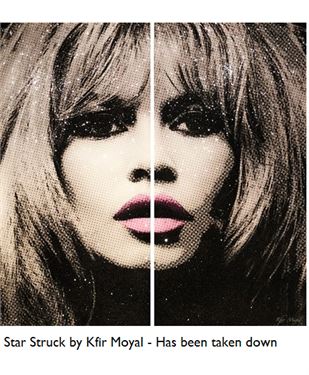 Kfir Moyal is a pop artist who has created commissioned pieces for celebrities like the Kardashians, Paris Hilton, Gloria Estefan, Flo Rida and Lil’ Kim. His signature style is to take a photograph and add a glittery sheen to it.

Douglas Kirkland is a Hollywood photographer with a long career who has photographed celebrities like Marilyn Monroe, Elizabeth Taylor and Marlene Dietrich.

In 2017, Kirkland sued Moyal for copyright infringement. Kirkland alleged that Moyal used some of his photographs, including one of Bridget Bardot. Moyal gave the photograph his classic treatment and titled his creation “Star Struck” (See picture). Moyal didn’t have a license from Kirkland to create the work. As the litigation went on, Moyal’s counsel withdrew from the case. Moyal didn’t appear after that and he didn’t retain substitute counsel. A default judgment was entered against him for $204,787.00 in damages along with a permanent injunction.

Kirkland discovered that Moyal was going to open an exhibit in a gallery in the Beverly Hills Sofitel hotel. The posters for the exhibit on Instagram and Twitter appeared to feature Star Struck. Since a permanent injunction against using Moyal's version of the photo was still in place, Kirkland went to court to enforce the permanent injunction.

Moyal says that he had no idea an injunction was entered. But that’s not going to help him.

WHY YOU SHOULD KNOW THIS. Kirkland’s original photograph was copyrighted in the 1970s. Moyal’s Star Struck was a derivative work of Kirkland’s original photograph. The ability to create derivative works is one of the bundle of rights included in copyright ownership. So, Moyal needed Kirkland’s permission to create the work. Let’s now focus on the injunction. Even though Moyal’s attorney withdraw from the first case, Moyal couldn’t just ignore it. Even if he didn’t know about the injunction, he knew that Kirkland was objecting to his use of the Bridget Bardot photograph. So, the second suit may have more dire consequences if Moyal’s knowledge of the infringement from the prior suit is considered willful infringement. There lies a cautionary tale in two ways. First, don’t use someone else’s content without either seeking permission for the use or getting an opinion of counsel that the use will be non-infringing or fair use. Second, never ignore litigation.