The 2020 Crippys – The IP Criminals Hall of Fame 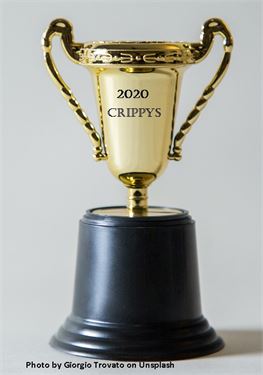 In Brief:  In past years, we have awarded Crippys to those who achieved infamy by committing Intellectual Property crimes over the last year. Here are the winners of the 2020 Crippys.

SECOND RUNNER UP CRIPPY: Goes to Anthony Levandowski. Anthony co-founded Google’s self-driving car program. He left Google and founded his own business that was later acquired by Uber. Google accused Anthony and Uber of stealing its trade secrets. Google accused Anthony of downloading confidential Google files that detailed the self-driving car program. Uber fired Anthony when he refused to cooperate with Uber’s internal investigation. Uber and Google settled. But the civil suit sparked an investigation that resulted in a 33 count grand jury indictment against Anthony. Anthony pled guilty to one count of trade secret theft. Considering the massive billion dollar scale of the crime, the judge sentenced Anthony to 18 months in prison and ordered Anthony to pay of $700,000 in restitution. From this we learn that a civil suit can launch a federal criminal indictment.

FIRST RUNNER UP CRIPPY: Goes to Hao Zhang, a professor at China’s Tianjin University. Zhang and five other people were charged with economic espionage, theft of trade secrets and conspiracy for attempting to steal trade secrets related to wireless technology for a film bulk acoustic resonator. Zhang and his co-conspirators engaged in a complex conspiracy to bring the trade secrets to China. After a four-day bench trial, Zhang was found guilty and sentenced to 18 months in jail and a fine of $476,835.00. From this we learn that being a professor doesn’t mean that you are too smart to avoid criminal prosecution.

GRAND PRIZE CRIPPY: Goes to the group of cyber-criminals who are exploiting the Coronavirus outbreak. These tireless hackers are using vulnerabilities in IT systems that have been stressed by massive remote working and learning. They have caused a spike in data security breaches that has put IT professionals on high alert. These intrepid criminals send millions of phishing emails posing as the Centers for Disease Control and Prevention and the World Health Organization to get people to click on links for more information about the Coronavirus. Then they steal private information and spread computer viruses and ransomware. Nothing like exploiting pandemic stress for nefarious purposes. Strangely, no one is stepping up to accept this award.

WHY YOU SHOULD KNOW THIS:  As we look forward to a better year than the last one, extra vigilance is going to be needed to keep IP criminals at bay.