The 2021 Crippys – The IP Criminals Hall of Fame 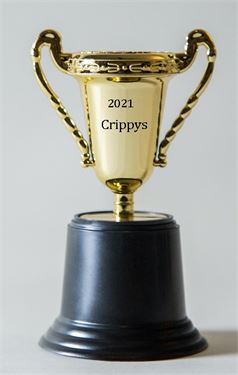 In Brief:  It’s time to acknowledge those who achieved infamy by committing Intellectual Property crimes during 2021.

Here’s What Happened:  Here are the winners:

SECOND RUNNER UP CRIPPY GOES TO: Raco Jordanov and Rose Lin who left Genetech, a manufacturer of biopharmaceuticals for treating cystic fibrosis and certain types of cancer, to form JHL Biotech. In order to avoid having to actually come up with something on their own, they paid a Genentech scientist to give them Genetech’s trade secrets. In an attempt to hide their nefarious acts, they sent the payoffs to the scientist’s husband. Raco and Rose were charged with criminal conspiracy to steal trade secrets and commit wire fraud. On August 24, 2021 they each plead guilty to one count of the indictment against them. This only goes to show that a shortcut by stealing trade secrets is a bad idea.

FIRST RUNNER UP CRIPPY GOES TO: Jonatan Correa, the owner of a painting business and a family man who helped a hacker group fraudulently obtain, copy and distribute 1,400 DVDs and Blu-ray discs before they hit retail shelves. They circumvented copyright protections by duplicating the videos for on-line consumption. Jonatan and his co-conspirators were charged with copyright infringement conspiracy. Jonatan plead guilty and threw himself on the mercy of the court when it came to sentencing. Jonatan’s attorney told the court that money wasn’t the point. The hacking was “a hobby, verging on compulsion” to gain entrance into a loose online piracy network. Jonatan’s attorney argued that if Jonatan has to serve time in prison, his business would fail and he wouldn’t be able to support his family. The judge sentenced Jonatan to 3 months in a community confinement facility that would allow him to leave during the day for work and he has to pay $54,000 in restitution to the Motion Picture Association of America. Jonatan should thank his attorney who was very persuasive.

GRAND PRIZE CRIPPY GOES TO: Victors Suhoruovs who achieved the dubious status of being one of the rare trademark scammers to be prosecuted for fraudulent trademark renewal notices. Using the business names of “Patent and Trademark Office LLC” and “Patent and Trademark Bureau LLC”, Victors sent USPTO trademark renewal notices to holders of registered trademarks. The notices looked pretty authentic but misrepresented the renewal dates with a false sense of urgency to renew now or the registration would be cancelled. Recipients who fell for this paid Victors significantly inflated fees. Because the time to renew hadn’t actually started yet, none of the fees paid to Victors were actually used to renew the trademark registrations. On September 15, 2021, the United States District Court for the District of South Carolina sentenced Victors to 4 years in prison and to pay approximately $4.5 million in restitution damages. So owners of registered trademarks should never rely on an unsolicited demand for money to cover the renewal of a registration.

WHY YOU SHOULD KNOW THIS: These infamous winners serve as a reminder that Intellectual Property crimes are prosecuted and the convicted face the consequences.