The New York Yankees Didn't Get the Joke 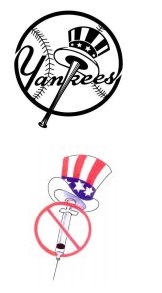 The New York Yankees were not amused when someone tried to register parodies of its famous trademarks . IET Products thought it would be funny to register trademarks that parodied the New York Yankees longtime logo and catch phrase. IET replaced the bat on the logo with a syringe referring to alleged steroid use by the players. Not willing to stop there, IET also sought to register “The House that Juice Built” as a parody of the famous catch phrase “The House that Ruth Built” (meaning Babe Ruth for the initiated). The TTAB refused to allow registration of IET’s marks. The TTAB reasoned that IET wasn’t really interested in making commercial use of the marks because they were going to be used as an “ornaments” on IET’s goods.

WHY YOU SHOULD KNOW THIS. In honor of the opening of the 2016 baseball season, we discuss the parody of famous baseball trademarks. A parody of a trademark is not really a source or product identifier. Rather, it is a non-commercial use that comments on or makes fun of the original. So IET could probably still adorn T-shirts and baseball caps with its parodies. But, it can’t register the parodies as trademarks. Can the Yankee’s stop IET some other way? The TTAB addressed that issue even though it really wasn’t part of the proceedings. The TTAB surmised that if the Yankees brought a federal trademark dilution claim, IET may be able to use parody as a fair use defense.