The® Importance of Being The® 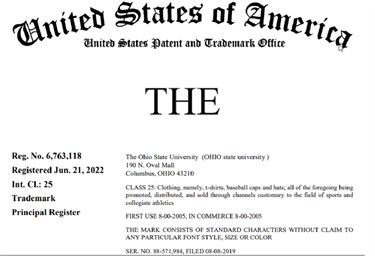 Here’s What Happened: The Ohio State University filed an application to trademark the word “THE” in connection with wearing apparel. The USPTO refused registration of the mark because it was merely ornamental and failed to function as a trademark. The University responded saying that the word “THE” had become a source identifier through continued use by The University. The University described “THE” as a rallying cry for its sports teams. Licensing the word averages more than $12.5 million a year. That money funds university programs and student scholarships. So, “THE” has acquired distinctiveness and functions as a trademark.

In response to the final refusal from the USPTO, The University amended the basis of its application from a use based application to an intent to use application. It then submitted a new statement of use with a new specimen showing “THE” as a label on the goods. That worked.

The University and Marc Jacobs reached a deal. They will each stay in their lanes for use of the “THE”. The University’s trademark is limited to clothing — T-shirts and hats — that are sold through “channels customary to the field of sports and collegiate athletics.”

Why You Should Know This: Some descriptive marks are can be registered after they’ve been used for a long time. The longer they are used, the more likely that a consumer connects the mark with the goods and services. Thus, the mark “acquires distinctiveness”. The University was wise to revise its application and submit a new specimen of use that showed “THE” on a label rather than as decoration on clothing. Also significant here is the deal between the parties. It was a win/win which is always something to strive for.