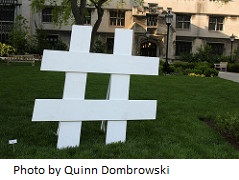 Can a hashtagged key word or phrase in a Tweet be registered as a trademark? For the uninitiated, Twitter is a social networking service where people communicate with each other with short messages (a “Tweet”). A Tweet can be tagged using a hashtag symbol (#) before a relevant keyword or phrase to categorize the Tweet and help it show up in a search. A business can generate buzz by using a hashtagged key word or phrase. For example #android and #SNL. There have been a couple of hashtag wars this year. One involved two taco restaurants over #tacotuesday. The owner of the hashtagged phrase tried to stop the other restaurant from using “Taco Tuesday” in an ad. The social media backlash caused the owner to back down. In another case, the Fraternity Collection brought suit against a competitor for using #fratcollection and #fraternitycollection. The court denied the competitor’s motion to dismiss the complaint deciding that the competitor’s use of the trademarks with the hashtagged phrases could cause customer confusion.

TAKE AWAY: The answer to the question is yes, a hastagged key word or phrase in a Tweet can be registered as a trademark. The USPTO adopted rules in 2013 that allow the registration of words and phrases that are preceded by the hashtag symbol. But the words and phrases without the # have be the proper subject matter for trademark registration.