Part II of a two-part series; Part I was featured in GCT Winter 2018 Newsletter
WHAT TO DO (OR NOT TO DO) WHEN RECEIVING A CEASE AND DESIST LETTER 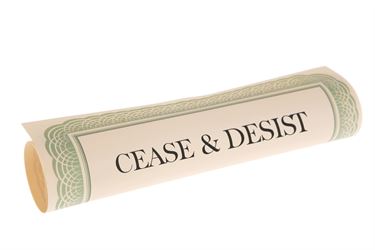 The following is a guide for what to do (or not to do) if you receive a cease and desist letter about an intellectual property dispute.

Don’t panic. No question that there’s a sinking feeling when receiving one of these letters. That is a natural response. But, the cease and desist letter doesn’t automatically mean that you have done anything wrong. More often the letter is from the claimant’s attorney. So the letter is the attorney’s opinion, based on the claimant’s perspective, that you did something wrong.

Don’t communicate, yet. Most likely, the letter will give a deadline for responding. Take advantage of the time. Don’t reach out to the claimant’s attorney immediately after receiving the cease and desist letter. Attorneys have professional responsibility rules that govern communications with a non-attorney respondent. But any communications with the claimant’s attorney could be used as evidence against you if the matter ends up in court.

Determine what claims are being made. Read over the claims in the letter carefully. Is the letter about copyright, patent, trademarks or trade secrets? A cease and desist letter can also claim unfair competition, defamation or breach of contract. The claims can overlap. For instance, trademark infringement can give rise to unfair competition claims. Or patent infringement can also involve breach of a patent license. If the claims involve a new employee, employment law issues can also be involved.

Gather and preserve your records. Gather up any documentation that exists about the claims, including letters, memoranda, creation notes, studies, etc. Once the documentation is located, preserve it and don’t touch it. Don’t destroy backup copies. Don’t disturb current versions. Don’t copy, e-mail or send information to anyone. 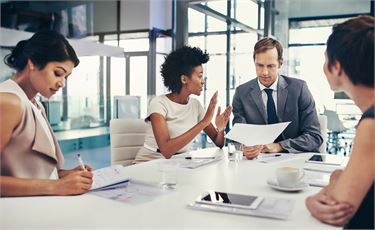 Work with your lawyer to prepare a response. There is always a temptation to ignore the cease and desist letter that appears to have no merit. But that could be a dangerous path. In all but extremely rare circumstances, a response is necessary. Your attorney can help craft the appropriate response. There are a number of ways to respond to a cease and desist letter. Sometimes, a response can be a phone call to the claimant’s attorney. The response can also be a request for further information to evaluate the claim. Or the response can be a full analysis of the facts and legal basis supporting the recipient’s position. If the claims have no merit whatsoever, then the response should be carefully crafted to point out the lack of merit of the claims.

Deal with the merit (lack of merit) to the claims. There are degrees of merit. If the claimant has a right that has been clearly violated, negotiations can be far more economical and less painful than trying to defend claims for which there is no defense. If the merits of the claims are far from clear, negotiations need not be a capitulation. Negotiations should be used to preserve your rights as well as the claimant’s rights.

Don’t use social media as a forum. Social media is a court of public opinion and not a court of law. It is not an appropriate forum for resolving a cease and desist letter. Further, anything posted on social media can be used as evidence against you. Better to stay mum.

Be prepared to fight if you have to. If the matter can’t be resolved through negotiations, then you need to make a decision, namely, fight or capitulation. A fight can mean a lawsuit. It’s best to consult with your attorney about the projected costs of defense. Even if you decide to capitulate, your attorney can help minimize the sting.

Evaluate. No matter the path taken, you should evaluate whether your business is vulnerable to future attacks. Golan Christie Taglia’s attorneys offer Intellectual Property audits and reviews of business practices, websites, content creation, etc. The audit and review will give you the assurance that you have taken a positive step to protect your business from future cease and desist letters.